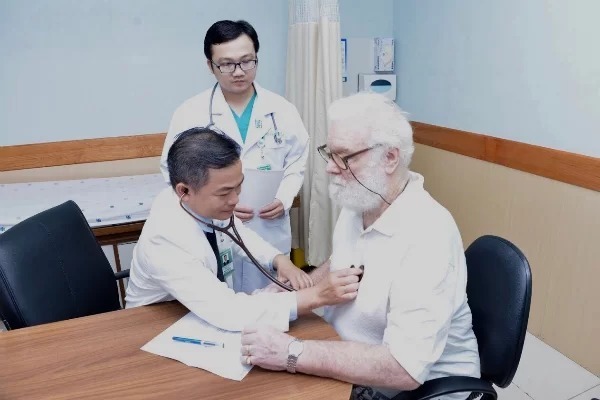 An Australian patient gets medical checks at a hospital in HCMC. Photo by VnExpress.

Many Vietnamese go abroad to seek medical treatment, but there is an increasing flow of patients in the opposite direction too.

Hong Luong, a 55-year-old Norwegian, has decided to have a tooth implant at the Saint Paul Dental Clinic in HCMC.

"I had one several years ago in Vietnam and choose to have another one now because the quality here isn’t any lower than abroad at all," he told VnExpress International.

Luong said he has always trusted Vietnamese dentists’ expertise, and the most important reason for his choice is the low cost.

It costs tens of thousands of dollars to get an implant abroad, but a little more than a dozen million dong (VND1 million = $43) in Vietnam, he said.

Thuy, a Vietnamese-Australian, has had an eyebrow tattoo done in Vietnam. She said the cost is possibly 70 percent lower in Vietnam than elsewhere, but the quality is even better.

For instance, during the Lunar New Year, when many overseas Vietnamese visit their homeland, there is huge demand in HCMC for cosmetic and dental services.

Nguyen Hong Huy, the chief doctor of a chain of dental clinics in HCMC, told local media that every year around Christmas and the Lunar New Year, his clinics get 900-1,200 overseas Vietnamese and foreign clients.

Minister of Health Nguyen Thi Kim Tien said some major city hospitals with well-appointed rooms and renowned doctors such as Cho Ray Hospital and HCMC University of Medicine and Pharmacy Hospital get many foreigners working in Vietnam.

Earlier this year she told correspondents at a press conference that last year some 300,000 foreigners sought medical checks at Vietnamese hospitals and 57,000 were admitted, a 50 percent increase from five years earlier.

Foreign patients include overseas Vietnamese, Laotians and Cambodians besides people from countries like Singapore, Japan and South Korea who live and work in Vietnam. Many of them come for dentistry, cardiovascular treatment, plastic surgery, and infertility treatment.

Tien said this is a good sign for Vietnam to "lure back" overseas Vietnamese, foreigners who live and work in Vietnam, and Vietnamese patients going abroad for treatment.

Pham Xuan Dung, director of the HCMC Oncology Hospital, said last year 664 foreign nationals came to his hospital for checks and 1,225 were admitted for treatment. Most of them were from Cambodia, China, the U.S., the Philippines, and Australia.

Dr. Ta Thanh Lieu, deputy head of the hospital’s surgery department 1, said many Cambodians come to Vietnam because of its proximity, reasonable costs and good quality of medicine compared to other countries in the neighborhood.

Dr. Mai Ba Tien Dung, head of andrology at Binh Dan Hospital in HCMC, said that his department receives over 20 patients from Laos and Cambodia every week.

Some work in HCMC and seek treatment at Binh Dan partly because it offers certain services unavailable in their countries and partly because of Vietnamese doctors’ reputation, he said.

For many Vietnamese-Americans, who decide to have plastic surgery here while visiting their home country, besides the lower costs, it also means much less time to get a doctor’s appointment compared to the U.S.

A spokesperson for a plastic surgery hospital in District 1, who asked to be anonymous, told a local media outlet that in the last three years the number of overseas Vietnamese coming to the hospital has doubled or even tripled.

And regular customers seek services up to three times a year, the representative said.

Besides the price and quality, another important factor is that plastic surgery in Vietnam offers more suitable looks for ethnic Southeast and East Asians, the representative said.

However, the picture is not all rosy. After getting emergency treatment, many foreign patients leave Vietnam to continue their treatment elsewhere. Dr Nguyen Huu Uoc, head of the cardiovascular and thoracic department at Hanoi’s Viet Duc Hospital, said one major reason for this is that Vietnamese hospitals are yet to accept foreign health insurance.

Infrastructure is often inadequate and too overloaded to provide comprehensive services demanded by foreign patients, he added.

In case of surgery on a patient from a country without consular representation in Vietnam, doctors need a relative or some other representative to sign an approval, something that is often not possible.

Luong does admit that many people are still afraid to go to Vietnamese medical centers because of bad things they might have heard.

"[They] could be about the culture of having to bribe doctors and nurses to get things done or having to wait in long lines."

Some overseas Vietnamese said what makes them hesitate about using healthcare services in Vietnam are "the poor hygiene at local hospitals and the unwelcome attitude of the Vietnamese medical staff."

In some areas, Vietnamese healthcare can even provide first-class quality. For instance, Dr. Ho Manh Tuong, secretary general of the HCMC Society for Reproductive Medicine, said in in vitro fertilization, Vietnamese doctors are among the best, matching Americans and surpassing Europeans.

Recently Hanoi’s K Hospital attracted attention after carrying out a complicated surgery to remove a cancerous tumor measuring 4 x 5 cm from a Japanese construction engineer who has been working in Vietnam for eight years.

Uoc, the most successful doctor in Vietnam in performing heart transplants and other complicated cardiovascular surgeries, has carried out challenging surgeries for some high-profile foreign patients.

One patient last year was Hsu Tse Sheng, a 73-year-old a billionaire from Taiwan, who suffered from a very serious thoracic aortic rupture during a visit to Vietnam.

The patient, who also has other complications, was only given a 10 percent chance of survival when he was hospitalized. After an extremely complicated four-hour surgery, Uoc and his team were able to save Hsu. In a gesture of gratitude, the billionaire donated $100,000 to Viet Duc Hospital.

As part of a master plan to upgrade health services, Tien said her ministry is building two more modern facilities at Hanoi’s Bach Mai Hospital and Viet Duc Hospital in the neighboring province of Ha Nam.

It is also continuing to invest in super-specialty centers in Hanoi, Hue and HCMC to ensure Vietnam acquires the latest technology to match regional standards in areas such as in vitro fertilization and organ transplant.

By Linh Do, Minh Nga / VnExpress