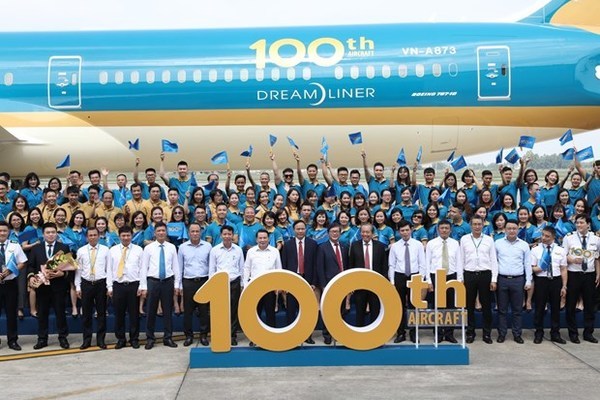 The plane is the third among the eight Boeing787-10s Vietnam Airlines has been receiving from August 2019 to March 2021.

This is the biggest aircraft type in Vietnam atpresent. Within two months, the first two Boeing 787-10s of the carrierconducted nearly 140 flights with more than 83,000 passengers on routes linkingHanoi with Ho Chi Minh City and Vietnam with the Republic of Korea.

Pham Ngoc Minh, Chairman of the Board ofDirectors of Vietnam Airlines, said the reception of the 100th plane is animportant milestone, affirming the leading position of the firm with thebiggest fleet in Vietnam that is comparable to other carriers’ in the region.

The fleet of new-generation aircraft has helpedVietnam Airlines improve its operating capacity, flight safety and servicequality so as to become a five-star international carrier in the near future,he noted.

At the ceremony, Deputy Prime Minister TruongHoa Binh said the joining of the 100th aircraft in the fleet demonstrates thedevelopment of Vietnam’s aviation industry in general, and of Vietnam Airlinesin particular.

However, the aircraft number is just one of theelements of a carrier’s strength, he noted, adding that service quality,technical infrastructure, and the capacity of personnel in all steps are alsokey to its development, sustainability and success.

While the firm’s wide-body airplanes mainlyoperate on long-haul domestic and international routes, the narrow-body onesconsisting of 52 Airbus A321s, 14 Airbus A321neos, and six ATR-72s have provedeffective on short-haul routes and those with lower travel demand or toairports with limited infrastructure./.